Five English Language Institute (ELI) students were among the winners of the Pan Global Challenge, a project sponsored by Blackstone LaunchPad to address the issues of cultural and language barriers between domestic and international students. Students were asked to develop innovative solutions that could be products, services or technologies that lead to better global communication.

ELI students Miwa Mashiko, Mengyao (Wendy) Wang and Merve Gencturk won third place for their idea of creating a Syracuse University dictionary app. The app would allow international students to ask questions about common names or terms on campus, such as “What is HBC Gifford?”

First place students received a monetary award and several winning ELI students traveled to New York City in March for a tour of the United Nations.

Wang says the experience was magnificent, especially seeing the 193 flags on display outside the United Nations building. “I was so proud when I saw my country’s flag,” she says. “I learned a lot from the tour guide, but also from the Syracuse alumna who met us in New York City.”

The students also had the opportunity to view the art collection. Each country is allowed to bestow one gift to the United Nations. The collection represents a diversity of cultures and periods in history. “Gifts included a Peace Bell from Japan, a Buddha statue from Thailand and artwork representing significant and historical events that took place throughout the world,” explains Pan.

Yang was most impressed with the general assembly hall. “Delegates from all over the world gather there to negotiate for the same goals; for peace and a better future,” she says. “In that hall, nobody is mediocre; everyone is equal.” 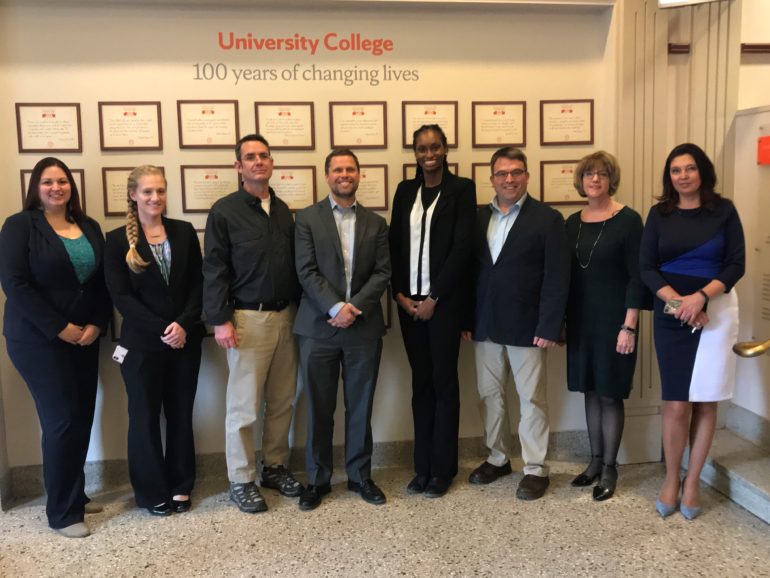 Sergeant First Class Michael Malizia, Captain Adrienne Gibson, Specialist Megan Sleeth, Captain Marl Pasibe and Sergeant Andrew Boyd will be hosting English language discussion groups with the civilian population in order to help them improve their English. “Helping the civilians build on the English skills they are already learning will not only empower them but will establish and grow the relationship the U.S. has in this area,” says Gibson.

“Consider using alternative methods to enhance the oral language instruction. Journaling and watching films can stimulate critical thinking and give the members of the discussion group another way to express themselves and make instruction interactive,” says Oganesyan. “It gives them the tools to share their stories, talk about their culture and learn about ours—all while speaking English.” The ELI staff also advised the soldiers to be culturally sensitive and establish a safe learning environment where everyone feels comfortable to participate.

“By observing the ELI classes and talking to the team about teaching strategies, we can now develop lesson plans for our assignment,” says Gibson.

The soldiers were given teaching guides and resources including picture dictionaries and English language workbooks. Each soldier also received a copy of “Becoming International,” a compilation of ELI student stories published last September.  The staff offered to act as consultants while the team was on assignment.

“This has been a tremendous opportunity for us,” says Malizia. “We now have a solid plan of action to lead these discussion groups. We are now better prepared for our mission.”

Syracuse University’s English Language Institute (ELI) at University College serves students of diverse backgrounds who wish to prepare for undergraduate and graduate programs in the U.S., and professionals who wish to advance their careers. The ELI also provides consulting and support services for units that work directly with international students.

When international students travel to the United States to learn English, the language barrier is just one of their challenges. Cultural differences like being overwhelmed in the grocery store, being embarrassed about not tipping a server (there is no tipping in China) or learning where to get help in serious situations are a few of the struggles they encounter.

During the 2017-18 academic year, students from Japan, China, Norway, South Korea, Taiwan and Saudi Arabia were able to put their experiences and feelings on paper.

As part of a writing project, the students were given autobiographical and creative writing prompts that encouraged them to reflect on what it means to travel abroad to improve their English language proficiency. 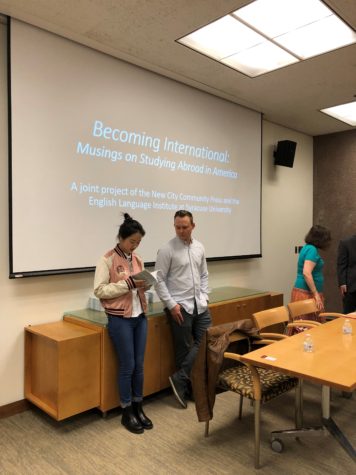 “At first the students did not think of themselves as authors,” says Amy Walker, an ELI instructor who wrote the book’s introduction. “They did not see the benefit of the project because their sole reason for attending the ELI was to obtain enough English proficiency for admission to an American undergraduate or graduate degree program.”

Walker adds that once the project was underway, unexpected positive outcomes started to appear for both the students and the teachers.

“The authors were brave. They allowed themselves to be vulnerable. They wrote about personal topics in a language that they had varying degrees of control over,” says Walker. “In the end, the students gained more confidence in their English and became more grounded in this U.S. collegiate environment.”

Huan-Chen Tseng from Taiwan wrote about his feelings of isolation when he first arrived in the United States. “In Taiwan, I am the oldest grandson on both sides of the family, so I have more responsibilities and benefits than the other grandchildren. However, in the United States, I’m just alone,” said Tseng. “I am nobody in the United States because nobody knows me, and I don’t have any friends here.”  During the fall 2017 semester when Tseng was on campus, he made friends and began to adapt to American habits. He acknowledged that this experience would help him in the future.

Eighteen-year-old Yongbin Yang noted one of the most difficult things about adapting to American culture is learning to be independent and manage his finances. “I came to the U.S., so I can’t rely on my parents anymore,” he wrote. “I need to take care of myself and think about every decision and its consequences. Finances will always be a big problem.” Yang said he can’t always buy things he wants because he has to balance his monthly budget. “But the process of becoming independent makes me feel better. I feel I am growing up.”

In partnership with Syracuse University Libraries, the English Language Institute hosted a book launch in September at Bird Library. Copies of the book are available for purchase on Amazon. 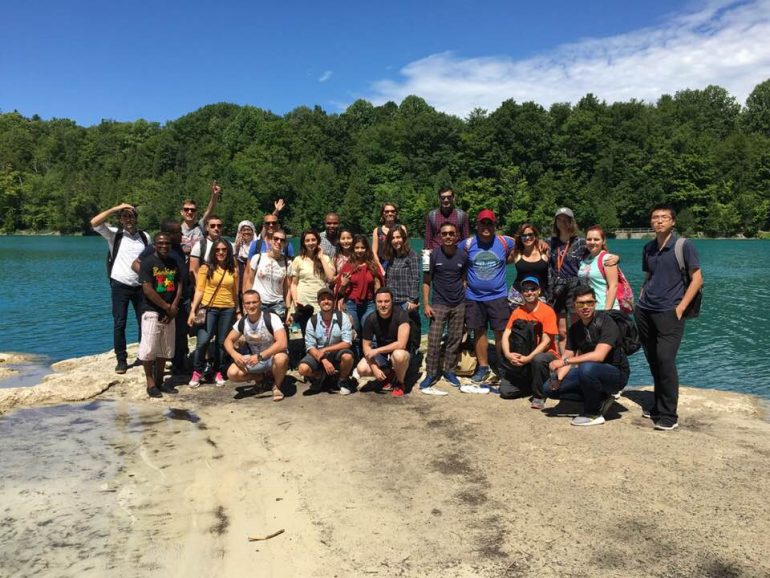 Dian Purwanti, from Indonesia, was most impressed with the clean tap water. For Cyrille Zongo, from Burkina Faso in West Africa, it was the clean streets. Rawan Badarna, from Palestine, was amazed by the technology and diversity.

These bright, motivated individuals were among the 38 Fulbright Scholars who arrived on July 14 for a four-week English for Graduate Studies program administered through University College’s English Language Institute (ELI).

Zongo says he could see how much more developed the U.S. was as soon as the plane landed in Syracuse. These differences are dramatic for many of the participants, who came from 23 countries, including Algeria, Brazil, Cambodia, Ecuador, Mongolia, Russia and Turkey. Most noticeable of all, Zongo says, is the hospitality. “People in Syracuse are very friendly and welcoming.”

This is the first year of a renewed five-year contract between ELI and the Institute of International Education, which manages Fulbright for the U.S. Department of State Bureau of Education and Cultural Affairs (ECA).

Participants are professionals who will remain in the U.S. to pursue graduate work following their Syracuse University sojourn. The ELI offers academic English, designed for students who are conditionally admitted to Syracuse University, students who wish to study at another university in the United States and professionals who would like to improve their English to better succeed in their careers.

While on campus, the students study a wide range of topics, including academic integrity, the U.S. political system, copyright laws and building a respectful environment. Interaction with their peers provides a glimpse into different cultures and faith traditions throughout the world.

The students took note of the teaching style they found in the U.S. “I was forced to share my opinion, discuss topics with my peers and work in a group,” says Purwanti. “It made me grateful to be in this program and prepared me for my graduate studies.” Purwanti will be staying on at Syracuse University to earn a master’s degree in teaching and curriculum in the School of Education.

“The academic rigor is very high compared to my country,” says Zongo. “This shows how effective and efficient the education system in the United States is and I’m glad I can learn though this system.”

Badarna notes that her classes were student-oriented and interactive. “Because the students were from different countries, my experience was much more enriching,” she says. “The instructor and student relationship is open and friendly–you can express your opinions and criticize politely. This improves a student’s critical thinking skills.”

When not in class or studying, the Fulbright students explored the rich history of Upstate New York. They participated in a guided tour of historic downtown Syracuse and visited Alexandria Bay.

Badarna was especially impressed with seeing a ship from Canada during a boat tour. “I was surprised to see how easy it is to move between two countries freely,” she says. “We don’t have freedom of movement in Palestine.” Badarna says that when she went to see her family in Palestine, she often had to go through checkpoints. “It’s difficult and time consuming to travel from one city to another, which discourages us from traveling.”

Purwanti says a highlight of her Syracuse visit was visiting Green Lakes State Park and Alexandria Bay. “My jaw dropped when I saw how clean every place is. I hope that someday Bali can be that clean.”

Zongo was struck by the beauty of Syracuse and the important role the city played in the history of the United States, particularly in the Underground Railroad. “The city has been able to keep symbols of important moments of Syracuse’s life. This is incredible,” he says.

The students admit that it was difficult to be away from family, but Badarna feels much better prepared now to move on to Loyola University in New Orleans to obtain an MBA. She found the English Language Institute program to be comprehensive and holistic, blending instruction, socialization, and engagement opportunities with American society.

Purwanti was a bit afraid that her Indonesian dress would isolate her from the other students on campus. “But all the people here greet you, even though you don’t know them. They are very welcoming. The people in my group are open to our culture and our differences, which made it easier to adjust.”

Zongo, who will be earning an M.B.A. at Rochester Institute for Technology, says “Syracuse University’s English Language Institute is the best. In a short period of time, they were able to teach us the essential English skills we need as graduate students. I was very happy with my experience here,” he says. “I will miss Syracuse.”